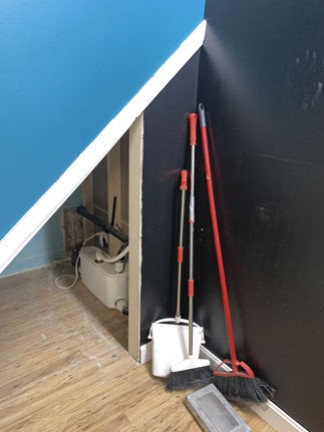 According to executive director Sarah Meikle, the organization desperately needed a first-floor bathroom that would function as a dog grooming/bathing area and accommodate a large utility sink. However, Meikle quickly realized installing such a space on the first floor of its two-story building, situated on a concrete-slab, would require a massive amount of work:

Second, the building — which also includes a large garage and office space on the second floor — sits toward the back of the property and below the municipal sewer line. Consequently, Diggity Dogs would need to pump drainage from the bathroom up eight feet (rather than relying on gravity) and then over another 12 feet to discharge into the existing plumbing drainage line. The latter services a sink and a second bathroom on the upper floor before emptying into the main sewer line.For one, to create conventional, below-floor drainage would require the destruction of the new waterproof, Cali Bamboo Vinyl flooring Diggity Dogs had only recently installed on the first level. Even if they were willing to sacrifice the latter, the cost of busting through concrete would have overwhelmed the available budget.

To accomplish all this, while sparing the new floor, Meikle concluded that an up-flush, above-floor plumbing system was the only feasible option.

Meikle’s research revealed that Saniflo macerating technology was the best solution, so she quickly ruled out any alternative. Meikle then contacted Saniflo to request a donation for their cause, and Saniflo happily provided a Sanibest Pro grinder at no cost.

According to Lafave, his company does three or four Saniflo installs a year. The Diggity Dogs installation was “very straightforward, and there was no doubt in my mind that it was the right solution for this application.”

Lafave Plumbing highly recommends Saniflo’s systems to its clients. “I’ve been installing Saniflo products for 15 years,” he explains. “Depending on the home and application, it is the perfect solution to avoid excavation and the cost and hassle that comes with it.”

The Sanibest Pro is a one-horsepower pump system used to install a complete bathroom up to 25-feet below the sewer line, or up to 150-feet away from a soil stack. The heavy-duty grinder is ideal for “uncontrolled” residential and commercial applications, such as rental units, offices and warehouses that involve a larger number and variety of users over time than a single-family home. In particular, the Sanibest Pro will handle bigger, more difficult sanitary products when mistakenly or carelessly flushed down the toilet; i.e., sanitary napkins, Q-tips, dental floss, etc.

“Our training center holds classes three nights a week with roughly 15 people each night,” explains Meikle, describing building occupancy. “In addition, two staff members are here 20 hours on weekdays, plus one person 24/7.” Since the bathroom would be used as a dog grooming/bathing area, as well as facilities for employees and trainees, the organization needed a heavy-duty and reliable system.

In Diggity Dogs’ full bath on the first level, the toilet is connected to the Sanibest Pro, while the sink and shower drain into the unit’s 2-inch inlets. A 1-inch PVC discharge pipe connects the discharge elbow at the top of the unit. A factory-installed non-return valve prevents backflow, while the discharge elbow rotates 360° — the better to accommodate any given application. Because all plumbing codes require a vent system connection, the unit has an integral vent connection on the lid.

Meikle was initially concerned about system reliability, given the number of people using the Diggity Dogs’ facility each week; however, “it has proven incredibly robust,” she reports. “I am elated it never once struggled to cope with usage in our busy training center!” She was also concerned that the dog hair would be problematic, but again, the Saniflo system “hasn’t had so much as a hiccup since the day it was installed.”

Lafave says once the space was ready to have the Saniflo system installed, the installation was quick — two days — and without any unexpected problems or delays. Meanwhile, the cost savings proved substantial. “If we had to cut through the concrete, we would be looking at three times the cost of the Sanibest Pro.”

“Every job is going to be different; this one, in particular, could’ve been three times the cost since there was a ledge at the property, and we would’ve had to cut through the concrete.”