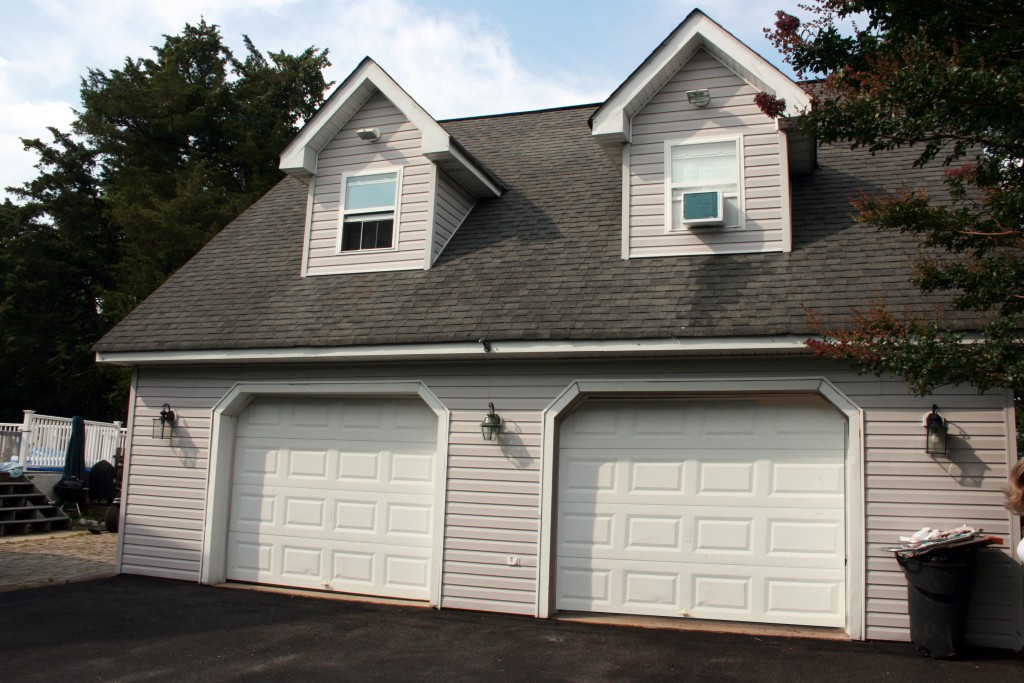 When Joe O’Neill decided to convert half of his two-car garage into a one-bedroom apartment with all the amenities, Saniflo’s above-floor macerator and drain-pump solutions combined to make the remodeling experience simple and cost-effective.

CAPE MAY, NEW JERSEY — Taking trips to Cape May, one of the oldest vacation resort destinations in the United States, is a favorite pastime for Joe O’Neill. The three-hour drive from his permanent residence in Maryland to his practically beachfront, home-away-from-home in New Jersey is worth every minute.Even after renting out the vacation house to its current tenants, O’Neill made certain the lease stated he would retain the accompanying detached two-car garage for his own use. His reasoning? O’Neill decided to convert roughly half of the space into his own, one-bedroom apartment, so he might continue to visit the beach at his leisure.

“The garage was large enough to put in an apartment with a kitchen, bathroom, laundry space, sitting area and bedroom, as well as continue to park two cars on the opposite side,” explains O’Neill.The project began by mapping out what would be the 30-by-12 foot living space and weighing various plumbing options.

One possibility for plumbing drainage was trenching the garage floor and putting in a sewage ejection pump. However, in addition to the cost of buying fixtures, this would be an unnecessarily expensive process.

Moreover, with its location only three miles from the ocean, the area has high water levels. Any digging in the ground for a sewage ejector pit inevitably results in rising water and a difficult time keeping everything in place.

Discussions with friends that have extensive plumbing backgrounds led O’Neill to decide with confidence that the best solution for the garage conversion would be above-floor plumbing products. After a quick survey of the space, a Saniswift drain pump was selected to handle properly strained drainage from the kitchen sink; while a Saniaccess 3 macerating system was chosen for three bathroom fixtures and a washing machine.

O’Neill’s ceramic-tiled, full bathroom — consisting of a toilet with an elongated bowl, a vanity sink and a shower — is built up six inches from ground level to facilitate gravity drainage. Designing the bathroom in this way eliminated the need for the shower itself to be on its own six-inch platform, minimizing the risk of slipping when getting in or out the shower. 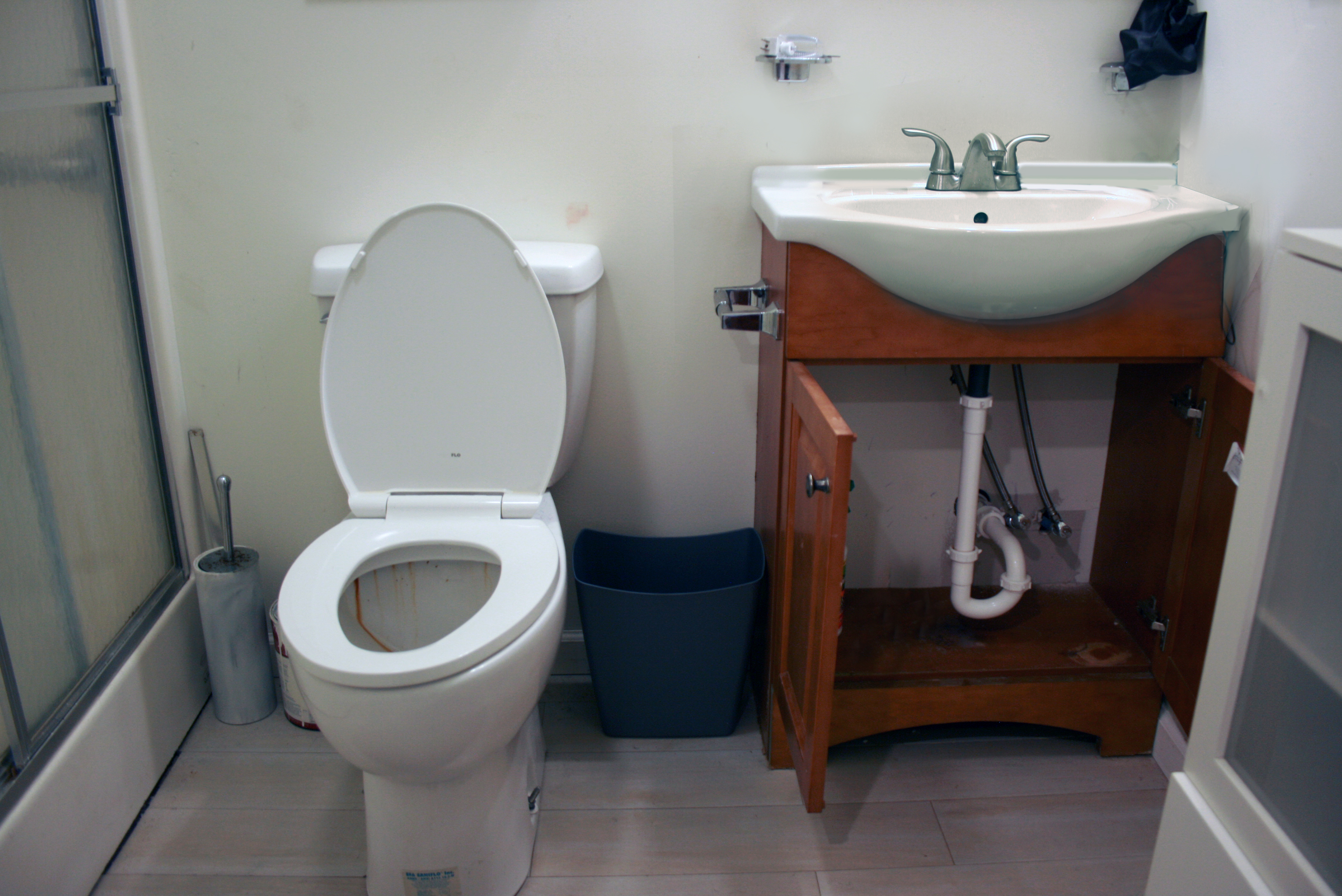 The Saniaccess 3 is a half-horsepower pump system for installing a complete bathroom up to 15 feet below the sewer line, or up to 150 feet away from a soil stack. The above-floor unit not only macerates toilet waste (black water), but it can also handle gray water from a sink, a bathtub, or a shower.

Simply for aesthetic purposes, O’Neill chose to position the Saniaccess 3 macerator box behind the toilet, but on the opposite side of the wall and facing the unfinished, “parking side” half of the garage apartment. The unit sits on a platform of its own to align with the raised bathroom floor.

An extension pipe, roughed-in through the wall, connects the macerator box to the toilet on the other side. The sink and shower discharge waste water into the Saniaccess 3 via a pair of two-inch inlets on either side of the unit.

The washer and dryer are hidden by bifold doors in what is basically a small closet. The washing machine drains indirectly, draining first through a utility sink, also situated on the parking side of the garage.

The ¾-inch discharge line from the unit runs eight vertical feet to the ceiling and over 20 feet before making a 90-degree turn, using two 45° elbows. After the final turn, the discharge pipe runs over another eight feet.

As noted, the Saniswift drain pump was used for gray-water drainage at the kitchen sink, which is situated about 20 feet away from the bathroom. For such an application, the manufacturer recommends that the kitchen sink be properly strained, so that no large objects drain 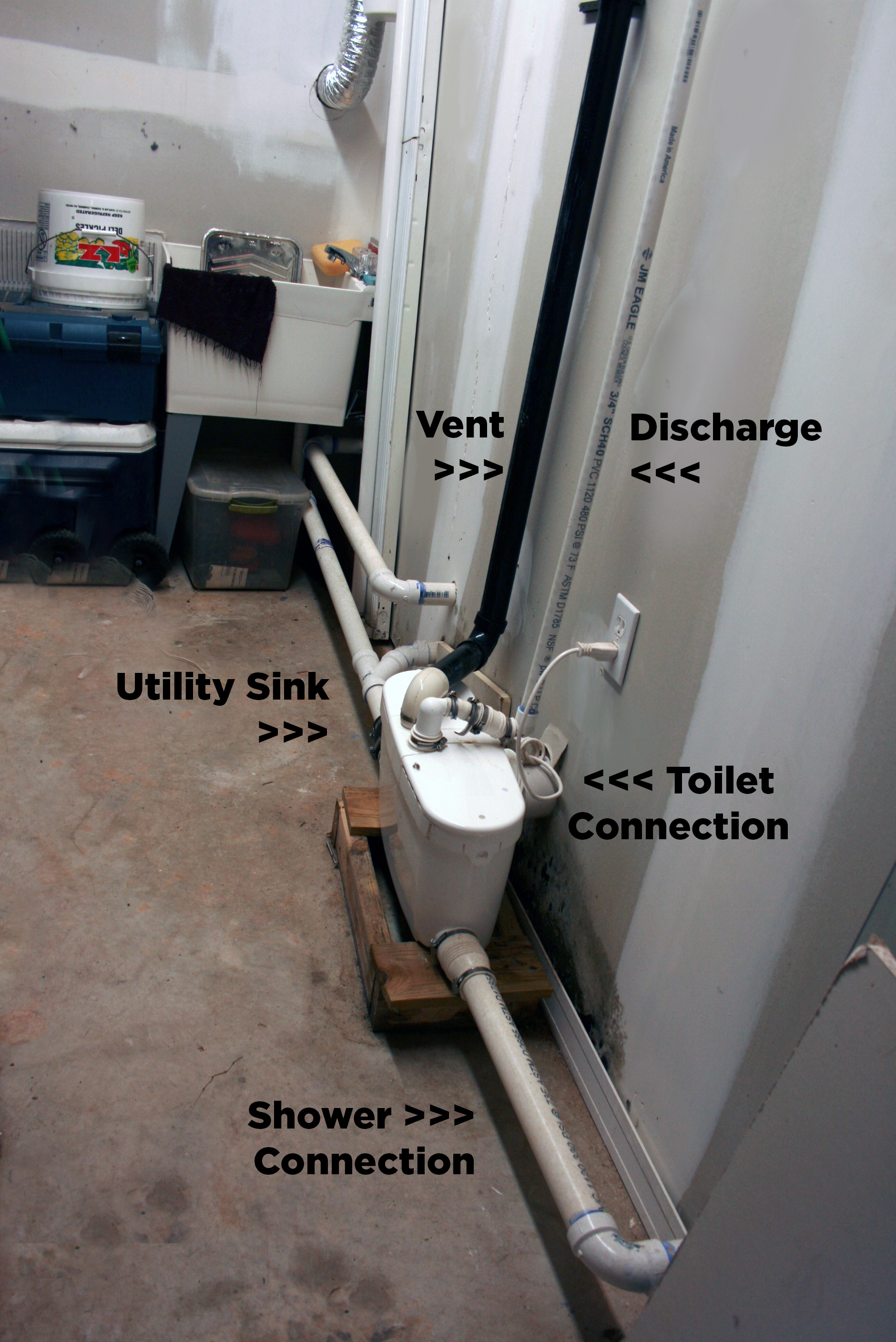 into the Saniswift. The unit pumps waste water horizontally about six feet to the drain. An existing bathroom on the second floor is directly above the garage, so it was simple to tie everything into that drain line.

“With limited space comes limited choices,” says O’Neill. “But the location we chose, in addition to the Saniswift, offered the most flexibility.”

The unit discharges up to 14 feet vertically and/or 140 feet horizontally and can handle a variety of other sanitary fixtures, such as a laundry sink, or a shower.

“Had we gone the conventional plumbing route, the cost would have been close to $4,700 just for the labor,” says O’Neill, who ultimately recruited Zieniuk N Sons Plumbing, Heating & AC to install the two Saniflo systems. “Saniflo was the most cost-effective solution for this application.”

Although Zieniuk anticipated a few slowdowns to the garage-conversion overall, they ended up facing no serious obstacles.

“The combo of the Saniaccess 3 and Saniswift was perfect for the conversion,” says O’Neill. “We had enough space to use as we wished, and the installation process went like a dream.”

Meanwhile, Joe O’Neill is now a pretty happy guy, enjoying his new comfortable and convenient living quarters from which to visit his favorite beach.”