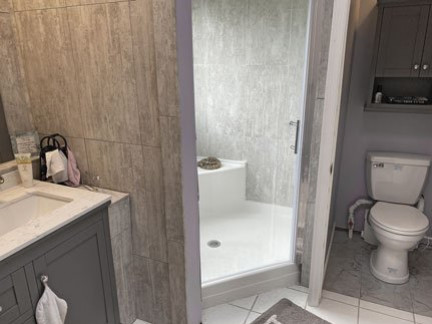 Robb Horton uses Saniflo’s Sanipro macerator to relocate a toilet to where his original shower was positioned by connecting the discharge pipe coming from the Saniflo unit to the existing two-inch drain line. 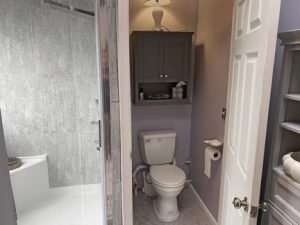 FAIRFIELD, OHIO — As part of a two-phase approach, Robb Horton decided to renovate the master bathroom on the second floor of his home in Fairfield, Ohio. The master bathroom included a jacuzzi tub, shower, a double vanity and a toilet.Phase one of the project involved replacing the seldom-used, large corner-style jacuzzi tub with a luxurious 5×5, double shower. While Horton and his wife enjoyed their new shower, they eagerly anticipated phase two of the renovation, which would solve a major inconvenience: a significantly undersized master closet.

To maximize the amount of space in the master closet, Horton could relocate the double vanity and existing toilet in the master bathroom. That way, he would reclaim some space in the bathroom floor plan to expand the closet.According to Horton, his initial plan was to turn the original shower space into an additional closet. But besides not resulting in a significant gain of closet space, it would have also caused an awkward layout and problems with overall traffic flow through the area.

Unfortunately, he ran into an obstacle: The only logical new space for the toilet was where the shower formerly had been located. However, reconfiguring the 2-inch shower drain to a 3-inch drain needed for a standard toilet was not feasible.

The conclusion? He was unable to use a conventional toilet that would drain below the floor. He had to find an alternative solution..

“I had almost given up on the closet expansion project when I found the Saniflo macerating toilet online,” explains Horton.

Upon a recommendation from a Saniflo engineer, he decided to install Saniflo’s Sanipro macerator system, whose half-horsepower pump can discharge effluent up to 15 vertical feet and up to 150 horizontal feet to a soil stack or septic tank.

Designed to handle a complete bathroom, the Sanipro will discharge not only black water from a toilet or urinal, but also gray water from two other fixtures; e.g., a sink and a tub/shower.

It incorporates a macerating system which can handle waste and toilet paper in residential applications. The blade is made out of a hardened stainless steel material which eliminates the need for any service or replacement.

According to Horton, his online research indicated that he could handle the installation himself, even with his modest plumbing experience of installing the double shower. “The combination of documentation and videos I found online gave me the confidence.”

“I was able to remove the under-floor trap that was there for the previous shower and connect the ¾-inch discharge pipe coming from the top of the Sanipro to the existing two-inch drain,” he continues.

“I also spoke with an inside technical sales representative from Saniflo several times. He provided valuable advice during my planning and validated my early installation steps.”

Horton explains that, for a DIYer like himself, home-improvement projects inevitably take longer than initially expected. “But the installation specific to the Saniflo was really simple,” he says.

He didn’t consider any other macerating toilets because he couldn’t find any serious competition for this type of application.

“I was a bit skeptical at first, because I had never heard of this type of solution for a toilet.” But he is now a believer in the Saniflo solution. “The system is fully operational and works well.”

“I’m mostly impressed by how quiet the pump is.”