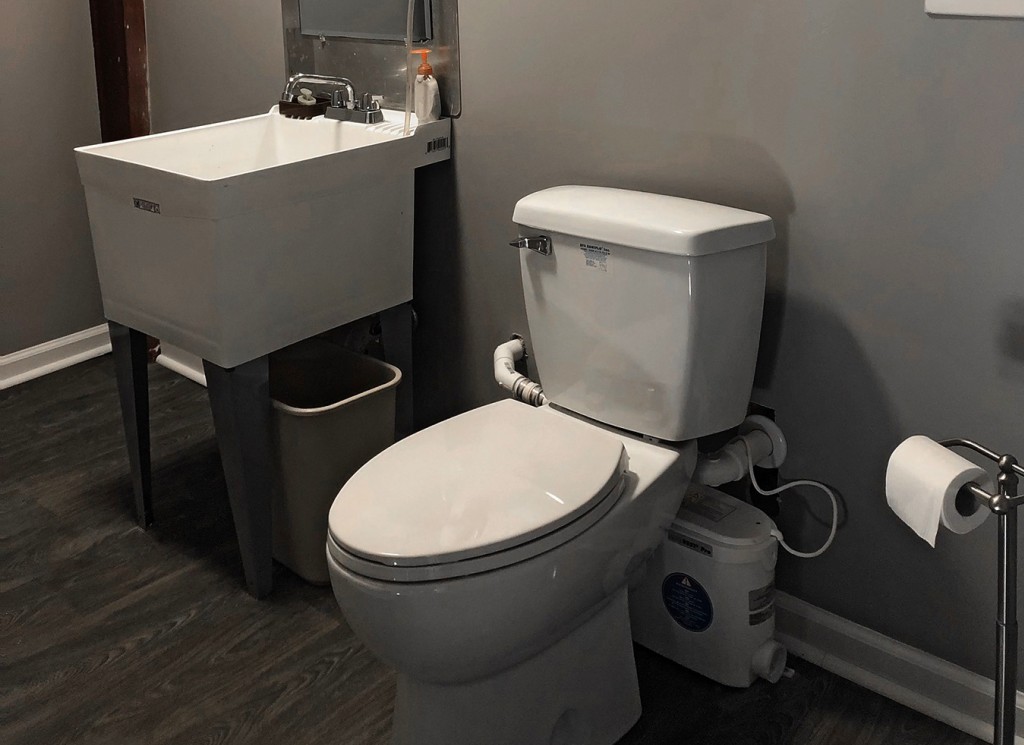 MIDDLE RIVER, MARYLAND — Joe Hall, master plumber, has been with Mitchell Plumbing for 16 years. When the company decided to relocate their headquarters to a warehouse, they soon realized that a new employee restroom was needed, and Joe with all his skills and experience would be the one to lead the project.

Fortunately, the new quarters had a space that previously served as a laundry room. The washer and dryer would be of no further use, of course, but the utility sink was still operational. As a result, Hall designated the location as the most ideal spot to convert into a new half-bath.

Conventional, below-floor plumbing was an option for the conversion, but a substantial amount of work — and expense — would be required to install a toilet with below-floor drainage, according to Hall. The biggest headache of all? Jack-hammering the concrete to create that drainage connection in.

“Breaking through concrete creates a set of challenges,” explains Hall. “You never know what it will bring, so we needed another solution.”

The next option for Mitchell Plumbing was a sewage ejector pump. But that would’ve generated another set of problems and obstacles including an uncertainty as to where a storage tank for the sewage ejector system to empty into would be installed. Additionally, with this option, waste would continue to accumulate in the storage tank until it reached a certain level.

A third argument against conventional plumbing: A standpipe was currently in the wall pre-conversion, offering an installation convenience that would be ignored if the preceding option was chosen. The standpipe, a vertical pipe usually connected to a washing machine’s drain hose, could maintain a large amount of discharge at a time. The existing standpipe was connected to a washing machine in the laundry room used by the previous residents. Instead of breaking through concrete and having the toilet drain directly into conventional plumbing, Hall wanted to make use of the standpipe and opted for an easier, cost-saving solution to pump waste to the standpipe’s position behind the wall and from there into conventional plumbing.

After some research, the chosen solution was ultimately Saniflo’s Sanibest Pro. Why? Because it would provide the easiest, obstacle-free installation without cutting through concrete. As Hall notes, comparing the above-floor option with conventional plumbing: “Do we really want to jack-hammer the floor up? Or do this the much faster way”?

The final choice was not a surprise: Mitchell Plumbing is a preferred installer of Saniflo, and Hall is a seasoned veteran when it comes to above-floor macerating toilet and drain pump systems. In fact, he has completed approximately 20 Sanibest Pro grinder-system projects in recent years, so there was no issue with his handling the installation himself at the new headquarters.

Ideal for public facilities, such as office or warehouse restrooms, the heavy-duty Sanibest Pro grinder is engineered to quickly dispose of larger objects that might well clog a conventional toilet. Water and organic waste matter entering the chamber of the grinding unit are reduced to slurry by the cutting blades rotating at 3,600 RPM.

The reduced fluids and solids are picked up at the bottom, and the pump impeller mounted beneath the one-horsepower motor ejects the waste upward 25 feet and/or horizontally 150 feet. Once the water level inside the container goes down, a micro switch deactivates the system until the next flush. A normal operating cycle for the Sanibest Pro takes about 10 to 12 seconds, depending upon the discharge-pipe configuration.

The Sanibest Pro can discharge not only black-water drainage from a toilet, but also gray water from two other fixtures. But in the Mitchell application, the additional connections were unnecessary, because of the functioning utility sink and its two-inch standpipe.

Waste from the toilet in the new Mitchell half-bath flows through a one-inch discharge pipe that runs only 12 inches to the standpipe. Hall had to cut the wall open slightly to connect the grinder system to the pre-existing two-inch washing machine box drain, located behind the wall. Other than that small wrinkle, the installation went smoothly, according to Hall.

“The fact that the product takes a one-inch discharge line makes it a pretty basic rough-in,” he says, “That’s probably my favorite feature of the Sanibest Pro.”

The process all together took about six hours: four for the rough-in and two more to connect the Sanibest Pro once the walls were finished. The system relieved Hall from dealing with any extra hassles or challenges:

“It was a pretty simple installation — just like it always is with Saniflo,” he explains. “I completed it by myself on a Sunday afternoon.”

Their own experience in their new headquarters laundry-room conversion reconfirmed this wisdom, with the Sanibest Pro saving the extra labor and expense of breaking through the floor and then doing concrete-repair work. After several weeks of continuous use, no issues with the Sanibest Pro or complaints from the Mitchell team arose.

“That’s the thing about Saniflo products,” says Hall. “They’re so simple to install, even by yourself. Little labor, little time, low-cost and extremely high-efficiency — it’s an overall better solution.”