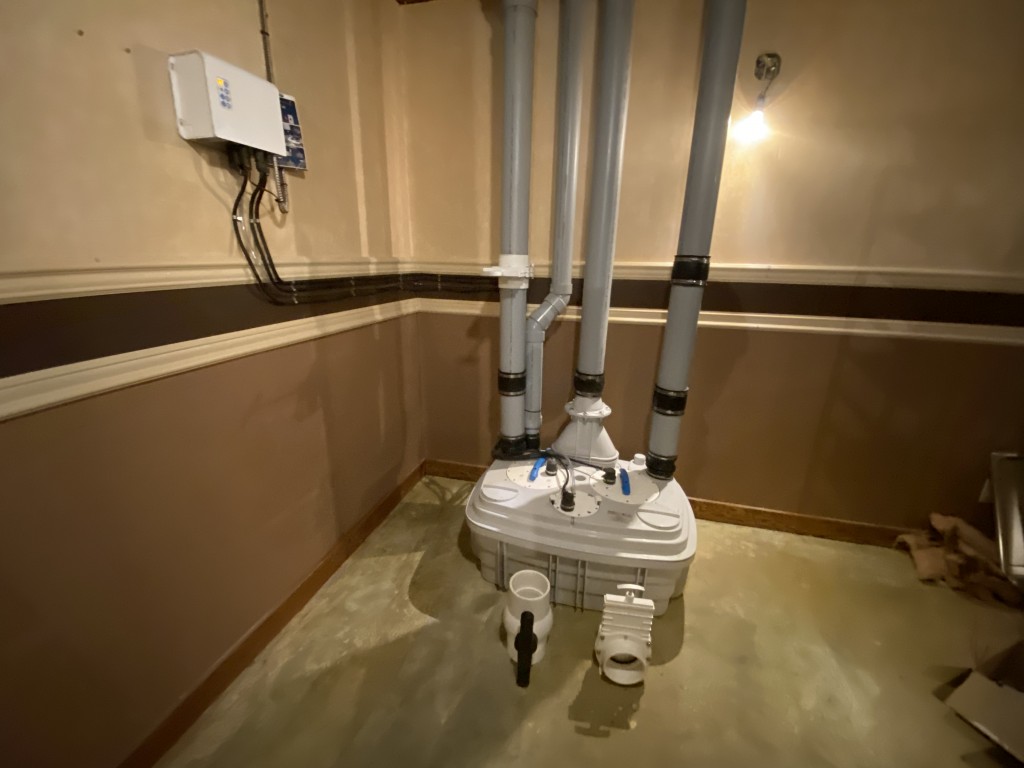 WHITEHORSE, YUKON — The historic Edgewater Hotel overlooks the majestic Yukon River, with a lineage tracing back to the Klondike Gold Rush. This particular gold rush between 1896 and 1899 involved a migration by an estimated 100,000 prospectors to the Klondike region of the Yukon in northwestern Canada.

In 2017, the hotel underwent a $2.2 million (Canadian) renovation, offering thirty-three upgraded rooms and suites, each with a new washroom featuring fully tiled showers and glass doors. But the upgrades did not end there, as hotel ownership recently decided to add a completely new wine bar to its list of amenities. The Belly of the Bison wine bar is slated to open in June/July 2021.

Awarded the plumbing scope of the project was Albanese Mechanical, a plumbing and mechanical contractor also located in Whitehorse. Tackling residential, commercial, and industrial service and installation, the company services the Yukon and Northern British Columbia.

"Being so remote, you need to have a broad range of knowledge and skills under your belt," he explains. “I love being in the service industry. You never stop learning, and it makes you solve a wide variety of problems for your clients.”

The Edgewater Hotel project, in particular, posed some unique problems. According to Albanese, the job entailed rerouting drainage from a cast iron soil pipe stack to the side of the building, while also picking up the drainage from the three new wine-bar washrooms.

A cast stack is the pipe system that wastewater and sewage flow into to be expelled into a sewer line. Located in the middle of the room above the hotel's basement, it discharges the drainage from seven of the hotel suites to the main drain line.

"With the new washrooms added to the wine bar, I could not make the grade to tie the drainage back into the main drain line," explains Albanese. "Along with that issue, there was no way to get around two large supporting beams for proper drainage.”

The best solution was to add the wine bar washroom loads (eight fixtures) and the load from the seven hotel suites (twenty-one fixtures, including showers, tubs, toilets, and lavatories) to the far side of the building.

Time is of the essence in the hospitality industry. Ultimately, hotel ownership’s main concern was to keep the hotel operational and downtime to a minimum during renovations.

Conventional plumbing wasn't feasible. Albanese needed a cost-effective alternative to pump wastewater from the newly added wine-bar washroom and hotel-suite bathrooms to the existing main drain line at the far side of the building.

"I didn't need to look far for a solution after explaining the situation to another contractor, who recommended Saniflo," Albanese says. Following a quick search on the Saniflo website, he called Saniflo Technical Support and explained the drainage issues. "That same day, I had the recommended Saniflo Sanicubic 2 Vortex unit on order from my supplier and ready to be shipped."

Equipped with two, 1.5-horsepower motors ("duplex"), the Sanicubic 2VX lift station can discharge effluent through either 2-inch or 4-inch rigid pipe and offers a shut-off head of 43 feet. The system provides above-floor drainage for multiple plumbing fixtures for an entire commercial or residential structure, thus eliminating the need for costlier and less-convenient sewage ejector pit installations.

Sanicubic 2VX employs an internal air pressure switch for automatically cycling the units on and off. This technology is far more precise than a conventional float mechanism.  The system comes equipped with a failproof sensing mechanism system. Three pressure switches are installed on the system’s own internal dip tube, in order to detect the water level inside the enclosure. As a result, it is nearly impossible for the system to fail. The unit also comes equipped with a wired control panel and an external audible and visual LED indicator alarm if a pump experiences overload or ceases to operate.

Featuring easily removable circular panels on top, the IP68 enclosure permits ready access to every major component inside. The result is easier and much cleaner servicing than conventional, below-floor systems whose maintenance can entail wading into a pit full of waste.

The Sanicubic 2VX uses a specially designed pump impeller to create a vortex action as the effluent enters the lift station enclosure. This technology keeps solids away from the impeller as it turns, pushing waste rapidly through the pump and to the discharge pipe. In doing so, the possibility of clogging is substantially reduced.

With up to 250 gpm flow rate, the maximum height either pump can discharge is 36 feet, using two-inch diameter pipe; and 20 feet, using four-inch pipe. Flow rates vary, depending on the discharge-pipe diameter and the elevation the flow must overcome, ranging from 26 gallons per minute (gpm) at 36 feet of head with a two-inch pipe and one motor operating; to 250 gpm at 3 feet of head with a four-inch pipe and both motors operating.  Both Sanicubic 2VX motors turn on upon GPM demand, increasing the amount of wastewater it is capable of discharging

Albanese installed the Sanicubic 2VX in the hotel's basement. "The 4-inch discharge pipe coming from the top of the Sanicubic 2VX runs 10.5-feet vertically and 25-feet horizontally before tying into the existing drain line.”

To keep the hotel operational, the Albanese Mechanical team blocked off time at night to cut into the line and test and commission the Saniflo unit. "The hotel was able to run normally after the testing was complete," he says.

Eventually, the basement, formerly a restaurant, will be converted into a gym. "After the conversion, I will cut into the floor and run conventional drainage lines while the lift station picks up the load," explains Albanese.

Albanese adds that the hotel owners particularly like that the Sanicubic 2 VX’s external audible and visual LED indicator alarm can be placed at the front reception desk to provide a quick alert if the lifting station encounters any issues.

Meanwhile, adds Albanese: "I will provide the client with a preventive maintenance schedule to keep the system in tip-top shape and cut down on servicing issues.”

Albanese says he would readily recommend Saniflo products to plumbing and mechanical contractors like himself. "Installing the Sanicubic 2 VX was quick and straightforward and the system is working perfectly.

"The unit allowed construction to continue on this job while the hotel carried on with minimal downtime," he continues. "It will also allow my customer to operate the new bar and will give them flexibility on when to start the basement renovation."

ABOUT SANIFLOSFA SANIFLO INC. is the only manufacturer of its kind in North America, offering a complete line of macerating toilet systems and gray water pumping systems for residential and commercial applications. Saniflo markets through independent sales agents throughout North America, and the product line is currently available at distributor and dealer locations throughout the United States and Canada.

For more information about SANIFLO, call toll-free at 1-800-571-8191 or visit the Saniflo website at www.saniflo.com.