Rather than installing conventional below-floor drainage for a staff washroom, SNC Mechanical opts for a heavy-duty above-floor solution, saving the owners of a midtown Manhattan restaurant roughly $6,000 by avoiding the need to break through concrete. 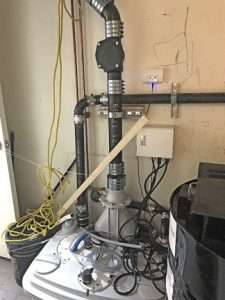 NEW YORK, NEW YORK — Established in the late 1970s, the venerable Ipanema Restaurant in midtown Manhattan recently underwent a major renovation of its two-floor space on 36th Street, just a few doors west of bustling Fifth Avenue. The extensive makeover of the Brazilian, family-style eatery entailed not just new furnishings and fixtures, as well as a fresh coat or two of paint, but also a redo of the floor plan to bring its décor up to date.New restrooms were an important part of the modernization: New men’s and women’s facilities on the main floor for the clientele, plus a third and separate private bathroom for the Ipanema staff. The location for the latter was a former employee locker room one floor below the restaurant in the basement.
Any building manager or homeowner who has sought to create a new and properly functioning bathroom in a basement — where no below-floor drainage exists — knows the difficulty and the expense of this application. Creating conventional drainage typically requires breaking up the concrete floor to run piping and, perhaps, to install some sort of holding basin for the effluent before a sewage ejection pump moves it to the soil stack or septic tank.
Sam Ferreira, owner of SNC Mechanical (East Meadow, NY), briefly considered such a conventional approach to creating the new employee bathroom at Ipanema. But he quickly rejected the idea because of all the work and the consequent cost.“Below-floor drainage for the toilet and a sink was not a good fit with our rehab budget,” comments Ferreira, adding that breaking through concrete was not only time-consuming, but would also create a major mess.An alternative solution was needed that would install with fewer hassles and less expense, while delivering reliable performance for the staff of a very busy restaurant. Says Ferreira: “The last thing the owners wanted was an employee washroom whose plumbing was in constant need of repair.”

The drainage solution SNC ultimately chose to install was an above-floor pumping system made by Saniflo: one that completely eliminates the need to bust up concrete and install a holding tank. With each flush, all effluent is promptly evacuated through the pumping device and discharged to the municipal sewage or septic tank system.
Saniflo offers several grinder systems suitable for smaller commercial applications like the Ipanema staff restroom. But the customer’s stated need for consistently reliable performance over time was so great, Ferreira opted for Saniflo’s most powerful system: the Sanicubic 2 VX, whose pumping capacity ranges from 26 gallons per minute (gpm) at 36 feet of head with a two-inch discharge pipe and only one of its two motors operating; to 250 gpm at 3 feet of head with a four-inch pipe and both motors operating.
What sets the the Sanicubic 2 VX apart is a specially designed pump impeller that generates a vortex action as effluent from a toilet or a sink enters the durable, waterproof enclosure of the device. Its vortex technology then propels solids away from the impeller as it turns, pushing waste rapidly through the unit and to the discharge line. In doing so, the possibility of clogging is substantially reduced.As Ferreira has already noted, Ipanema’s ownership wanted to do everything they could to minimize operational problems with the staff restroom. Which is also why he chose the Sanicubic 2 VX. As noted above — and as its name indicates — the device houses not one, but two, 1.5-horsepower motors. This “duplex” feature makes it capable of handling multiple fixtures from multiple restrooms.But in the case of Ipanema, the second pump is viewed as essential redundancy: Should one motor need servicing, the other still operates — and the employees can still use their private facility while that servicing is done.

The Sanicubic 2 VX can discharge effluent to a maximum height of 36 feet, using two-inch diameter pipe; and 20 feet, using four-inch pipe. At Ipanema, the pumping distance was much shorter, with SNC running a 3-inch PVC line vertically only eight feet. For the vent run, the SNC team used 2-inch PVC that runs a vertical distance of approximately 10 feet.
Ferreira reports that the Sanicubic 2 VX installation went quickly and smoothly, with the overall bathroom creation requiring his team three days. That time span compares favorably with what a conventional drainage strategy would have demanded, says Ferreira, “chopping through concrete and then patching up the same floor again.”
His work finished, Ferreira now pegs the cost savings with the Sanicubic 2 VX at around $6,000. “There’s no question that the above-floor plumbing solution was the way to go on this project,” he says, noting that the Ipanema project marks his first use of the Sanicubic technology.
“In this New York market, with all the basement applications we encounter in both homes and businesses, I expect we will have opportunities to use this product again. It’s a very well-made system that installs easily.”

###
ABOUT SANIFLO
SFA SANIFLO U.S.A. – whose parent company originated macerating plumbing technology — offers a complete line of waste and drainage pumping systems for residential and commercial applications. Saniflo developed its innovative, “above-floor plumbing” technology more than a half-century ago and has led its commercialization worldwide. Today, the company markets macerating technology through 24 subsidiaries in 50 countries and has sold more than seven million units worldwide since 1958. Saniflo markets through independent sales agents throughout North America, and the product line is currently available at distributor and dealer locations throughout the United States and Canada.For more information, contact Saniflo at 1-800-571-8191. Or visit the Saniflo website at saniflo.com.For editorial assistance, including photography, contact John O’Reilly c/o GreenHouse Digital + PR: 815-469-9100 or john@greenhousedigitalpr.com.