Understanding the Value of a Product Warranty 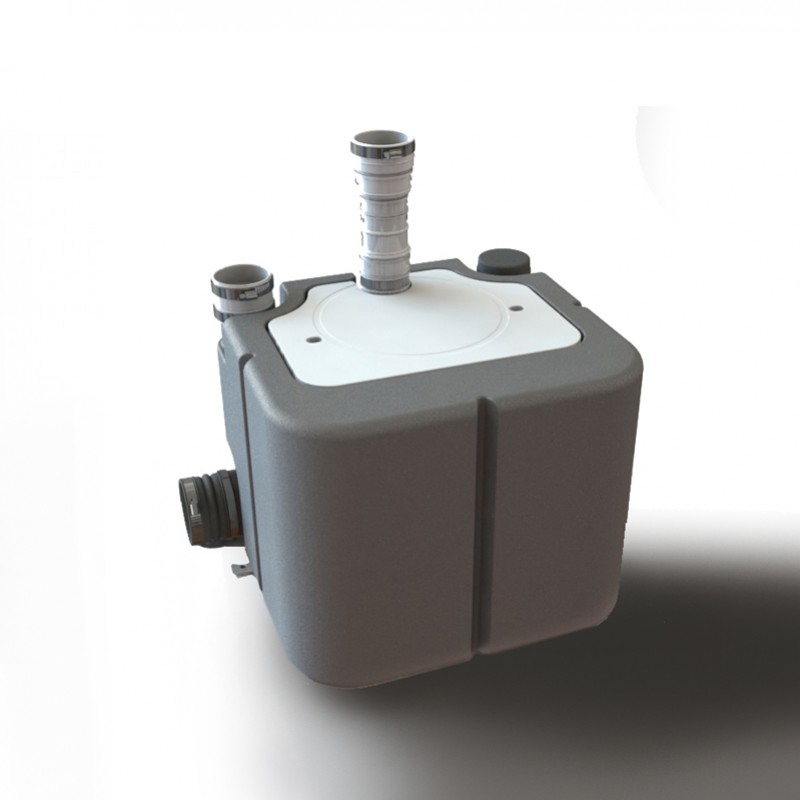 EDISON, NJ (FEBRUARY 1, 2021) — Saniflo USA, a division of Group SFA, the world leader in above-the-floor macerating and grinding toilets and drain pumps, recently introduced a heavy-duty companion to its popular Saniswift residential drain pump. The new, IAPMO-listed Saniswift Pro prominently displays the Uniform Plumbing Code logo, marking its acceptance in the Western United States where UPC compliance is a must.

Designed to meet larger commercial as well as conventional residential drainage applications, the Saniswift Pro can handle gray water from up to three fixtures: sink, shower, dishwasher or washing machine (via a laundry sink). The pump is encased in a more robust, yet stylish, cube-shaped exterior that can be easily installed in hard-to-reach spaces, such as beneath a bathroom or kitchen sink. Measuring 12¼ inches wide x 9¾ inches high x 11¼ inches deep, the product is slightly larger and three pounds heavier than its predecessor, but still offers a more compact profile than other drain pumps.

No drainage storage = no odors + longer pump life: Like the Saniswift, the new Saniswift Pro is not simply a sump pump in a bucket. Its superior drain-water detection and removal sequence is engineered to extend the overall lifecycle of the pump, while also eliminating unwanted odors.Servicing can be done without disconnecting any piping to the unit. Made of rugged, high-density polyethylene (HDPE) to resist corrosion from harsh chemicals, the Saniswift Pro encasement has a top cover with two removable screws, providing ready access to all electrical components inside. The pump motor can then be quickly lifted from within to remove any foreign objects in the impeller.

Traditional drain pumps store wastewater until a level float inside these units triggers drainage discharge. This waste storage can lead to odors, while the presence of corrosive drainage can cause product deterioration over time.

The Saniswift Pro stores no waste, but uses a short-cycle motor to begin drainage immediately, while also keeping the basin empty during operation. Water entering the unit triggers a sensor that immediately activates a pressure switch, causing the motor’s spindle/shaft to turn the pump impeller (at 3,600 RPM) and discharge the waste. The 0.3-horsepower motor is sealed for life in an oil-filled enclosure, while moving parts are kept to a minimum. The results: More efficient and effective drainage with no unpleasant odors and a longer product life.

Once the water is discharged and the water level inside the Saniswift Pro drops, the pressure switch deactivates the unit — until effluent enters the unit again. A normal operating cycle for the Saniswift Pro is between three and five seconds, depending upon the discharge-pipe run configuration. Power consumption is therefore minimal.

Lower inlet positioning = easier installation: The installer-friendly design of the Saniswift Pro also features a pair of two-inch inlets, one on either side of the unit, with diameters that comply with major plumbing codes. These side inlets are positioned lower than those found on conventional drain pumps, further easing installation.

The top of the Saniswift Pro also has two inlets, each measuring 1.5 inches, for connecting the unit to a venting system, as required by local plumbing codes.

Using a discharge line of 1, 1¼ or 1½ inches in diameter — to accommodate a variety of retrofit applications — the Saniswift Pro will pump drainage 14 vertical feet and 140 horizontal feet, or a lesser combination of these two distances. (A vertical run of three feet is equal to a horizontal run of 30 feet.) Like the Saniswift, the new pump will discharge 18 gallons per minute (GPM) at a discharge distance of 14 feet; and 24 GPM at three feet.

“With the growing need for above-the-floor plumbing solutions, we felt it was time to introduce a more rugged drain pump that meets the demanding needs of both residential and commercial applications, including in regions where UPC codes are the standard,” explains Regis Saragosti. “The original Saniswift has been a huge success for Saniflo, while this new Pro edition will appeal to those residential and commercial customers who prefer a heavier-duty product with an attractive, more industrial-type look at an equally attractive price point.”

For more information on the new Saniswift Pro, visit: https://www.saniflo.com/new-product-imported-from-sfa-france/242-saniswift-pro.html

ABOUT SANIFLOSFA SANIFLO U.S.A. – whose parent company originated macerating plumbing technology — offers a complete line of waste and drainage pumping systems for residential and commercial applications. Saniflo developed its innovative, “above-floor plumbing” technology more than a half-century ago and has led its commercialization worldwide. Today, the company markets macerating technology through 22 subsidiaries in 50 countries and has sold more than eight million units worldwide since 1958. Saniflo markets through independent sales agents throughout North America, and the product line is currently available at distributor and dealer locations throughout the continent.