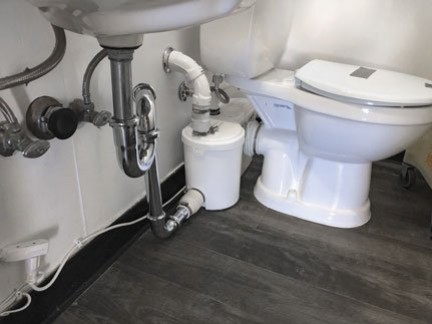 Project manager of Los Angeles County’s outdoor recreational area, Bonelli Park, selects the Sanibest Pro macerating unit, rather than conventional plumbing drainage, to get a floating bathroom back in operation and within a tight budget.

The lifeguards employed at Bonelli Park have a unique headquarters for when they need to take a break or use the bathroom while on duty — a floating boathouse on the 250-acre lake. But, after years of use, the existing facility recently needed a remodel, especially the bathroom within, due to an inaccessible leak.

Alternative plumbing solutions to get the bathroom running again were limited. For example, there was no way to run a sewer line from the toilet to the existing holding tank, because the maximum slope angle wouldn’t allow for proper drainage. This eliminated traditional plumbing methods.“There are giant round tubes of foam that float underneath the boathouse,” explains John Tietjen, who has served as Project Manager for 17 years. “These foam tubes hold the drainage pipe from the toilet above. One had a leak inside, and there was no way to access it and patch it up.”

The unique floating situation called for an equally unique remedy. Tietjen and his team began looking for options that would be ideal for boathouses.

“We quickly found that a macerating toilet would be the perfect solution, and Saniflo stood out to us because of their great reviews,” says Tietjen. “One call to Saniflo to explain our situation confirmed the reviews, too. Their customer service and willingness to help put them in the lead.”

The team at Saniflo recommended the Sanibest Pro for the Bonelli Park bathroom application. Ideal for public facilities that cannot be closely monitored, the heavy-duty Sanibest Pro grinder can quickly dispose of larger objects that might well clog a conventional toilet. The reduced wastes are picked up at the bottom of the unit and pumped upward 25 feet and/or horizontally 150 feet. Once the water level inside the container goes down, a micro switch deactivates the system until the next flush.

The Sanibest Pro can discharge black water from a toilet while also discharging gray water from two additional fixtures; e.g., a sink and shower in a conventional bathroom. In the case of the Bonelli Park floating facility, the wastewater from both the toilet and the sink flow through a one-inch discharge pipe from the Sanibest Pro up 25 feet into the park’s sewage system.

After learning a little about the product, Tietjen agreed that the Sanibest Pro was the optimal solution for his unique setting.

“Once solid waste is in the sewage system, bacteria breaks everything down, forming a liquid for it to eventually leak out,” explains Tietjen. “With Saniflo, you’ve eliminated the length of the breakdown period, and once the waste reaches the holding tank, it’s an easier discharge process.

“Thanks to this,” he continues, “we can expect the Sanibest Pro to help prevent overflowing, over-usage, and other issues that we experienced in the past.”

Saniflo representatives arrived at Bonelli Park to demonstrate the system’s installation process to both the project management team and Scheu Plumbing, hired by the public works department to assist with the installation.

The process began with the removal of the existing toilet and capping off the sewer line. Because of the leak from the previous setup, the project team had to confirm that no water had overflowed into the bathroom facility.

Once the pre-installation part of the job was completed, the wall was cut open and the drain line was connected to the toilet and sink for Scheu Plumbing to install the Sanibest Pro.

The entire bathroom application took less than a day to finish and went smoothly, much to the pleasure of Tietjen, who had initially set aside several days for the installation.

Besides the unmatched customer service and quick installation, the overall costs and functionality of the Sanibest Pro were huge selling points for Tietjen, compared with other macerating systems on the market.

“We were working with a smaller budget and choosing Saniflo helped us stay within scope,” he says. “Also, I’m very big on customer service. When Saniflo showed up, on-site, with a truck that had a toilet in the back for a demo, I had a great feeling.

“The toilet has been working great since the job’s completion.”